It was every oenophile’s nightmare.

On September 28, 2020, Governor Gavin Newsom declared a state of emergency for three counties that are synonymous with California wine – Napa, Sonoma, and Shasta – as blazes from the massive Glass wildfire tore across the landscape. By October 20, thanks to the efforts of over 2,000 firefighters, the fire was contained. But the damage was done. Among the 1,555 structures consumed in the wildfire’s 67,000-acre rampage were 31 wineries — including the famous Chateau Boswell Winery and the Castello di Amorosa Winery.

Wine may age well, but the industry’s future is anything but rosy. It’s not just California, which accounts for 3 out of every 5 bottles sold in the United States. Regions the world over long considered fertile ground for harvesting the perfect wine grapes are turning hotter and hotter and dryer and dryer each summer as extreme droughts desiccate the land, creating conditions ripe for brutal blazes.

So while the pandemic may have produced scores of amateur at-home sommeliers and newly crowned wine snobs, climate change is throwing into question the industry’s ability to produce enough supply to meet demand.

And that’s what we’re looking at today: the present and future of the wine industry. So (if you don’t get to this newsletter until after 5 pm) pour yourself a glass and let’s dig in — though you may want to think extra hard before uncorking that special 30-year-old bottle of Napa-sourced Cabernet Sauvignon, as you’ll see.

Cork in the Road
Climate change is hardly the only curveball thrown at the wine industry in the past few years. The pandemic shuttered bars, restaurants, tasting rooms, and home dinner parties — all crucial revenue streams for vintners. But the industry recovered as all those Zoom happy hours and tasting sessions seemed to pay off. The total market size of the global wine industry was around $417 billion in 2020, according to Grandview Research, and rebounded to around $434 billion last year as the world reopened.

That’s a lot of used corks to collect. And, more importantly, a lot of money on the table. 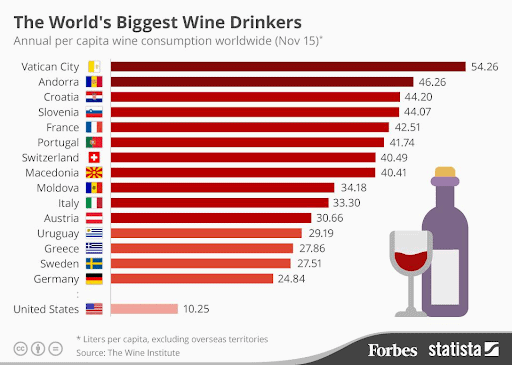 Ashes to Ashes
This summer, much of western and southern Europe — i.e., prime wine grape growing real estate — has suffered generational heat waves. French officials declared the resulting drought the worst ever on record, and several regions in Spain soon followed suit. The agriscience isn’t hard to understand: less water in the ground means less water gets into grapes, leading to lower yields of smaller berries.

Worse, this summer’s heat wave comes just a year after a biting frost dragged wine production to historic lows across the continent; Axel Heinze, estate director of Italy’s Ornellaia vineyards, told The Wall Street Journal earlier this month that unpredictable weather conditions have afflicted vineyards every year since 2017. “We’ll be in a state of uncertainty until the end of our careers,” he added.

In other words, extreme and unpredictable weather brought by climate change is the new normal for the industry. So just how bad has this summer’s harvest been for grape growers? The numbers may have you fearful of spilling even a drop of your favorite Merlot:

With Hints of Catastrophe: Worst of all for winos, it’s not just yields being affected — climate change is changing how wine tastes, and not necessarily for the better. Warmer weather means less acidic grapes, which leads to a dreaded “acidic meltdown” in which alcohol levels rise and taste suffers. “My Grenache moving from 13 to 13.5 percent is not a disaster but Pinot Noir at 15 percent is,” one winemaker from South Africa’s burgeoning vineyard scene whined to the Financial Times.

But a boozier product may be the least of winemakers’ concerns. Fire scorched regions are leaving wine with an unexpected tasting note: ash. Following the 2020 wildfires, California growers rushed to test their grapes in professional wine chemistry labs for “smoke taint,” according to The Atlantic. The panic caused eight-week delays in labs, and left around 8% of California wine grapes to go unharvested.

The Fruits of Labor: On top of all that, good grape-pickers are harder and harder to find. For the world’s best wine, harvests require the hands of highly skilled laborers. And like just about every other industry in the world right now, wine makers are struggling to fill open positions.

Vineyards in Napa Valley now pay workers up to $75 per hour, the highest in the world, according to the FT. Meanwhile, Australia’s vintners have been cut off from their usual stable of itinerant Vietnamese and Cambodian workers due to pandemic-spurred border closures, according to the FT, while local laborers are increasingly opting for jobs that keep them indoors — and safe from the increasingly blistering heat.

A Sparkling Future?
It’s not all cork taint for the industry, for sure. Indeed, there’s still reason for optimism, especially on the demand side of the equation. The oldest millennials are now just turning 40 — meaning America’s largest generation is hitting the age where hoppy IPAs are sure to give heartburn, and taste buds are maturing enough to appreciate a perfect glass of Zinfandel. In other words, this giant age cohort shows every indication of ditching their cans of watermelon White Claws for glasses of white sauvignon blanc wine. 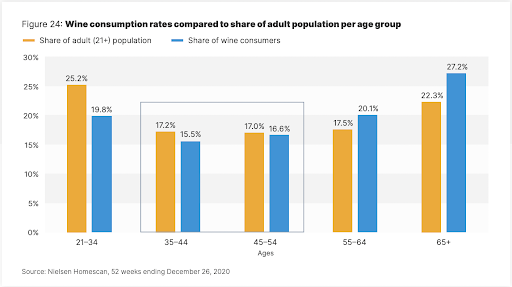 With that in mind, market analysts are expecting the industry to only continue to grow. Grandview Research expects the global wine market to expand at a compound annual rate of 6.4% through 2028 — with revenue forecast to reach an eye-popping $686 billion.

The industry is also receiving an unlikely boost from today’s biggest economic bugaboo: inflation. In fact, some of the world’s wealthiest, savviest investors are assigning new utility to the fermented grape beverage: as a reprieve (financially, not emotionally) to the world’s soaring prices:

We toast him, and hope the industry can figure out how to keep up on the supply side despite climate change and all the other acid challenges.